Running programs automatically as service is not always an easy task. Some well known applications come with their own managers (e.g. unicorn, forever, pm2) but there is no unified approach across technologies.Custom build code often tend to come as a simple executable that runs in the foreground. And eventually init scripts simply ensure the services start but usually does not handle respawn.

Supervisord offers a solution to all the issues above and allows you to monitor and control processes. It lets you: 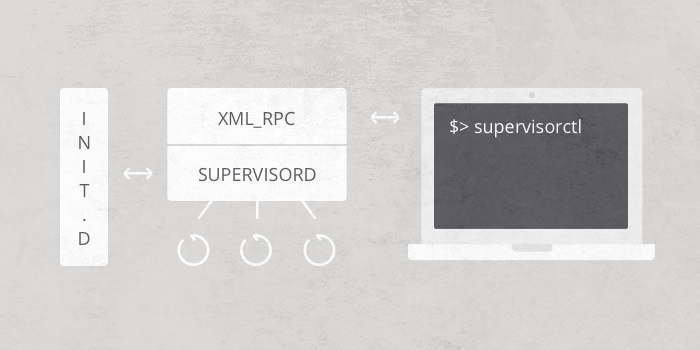 We're taking the mixed approach of running standalone commands and executing custom code as a service. Our example will be a deployement process.

A deployment may involve more that simply restart a service, but require to install dependency, etc.

When dealing with multiple servers, the deployment workflow may be different due to the various services involved; having supervisord doing some unified interface is extremely convenient.

One can simply run supervisorctl start deploy and get the deploy process starting. Within the deploy.shscript, one can put any of the required logic needed to deploy the code

Enhancing the workflow with HTTP support for supervisord

The 2 code snippets above let you simply run the deployment operations and get the app restarted if necessary. But supervisord does not allow (yet) remote control.

This can then be very easily extended and triggered remotely by making use of the HTTP xml-rpc interface.

Add the following to your supervisord config (/etc/supervisor/conf.d/inet.conf)

Where the secret_hash is calculated as such echo -n 'secret_pass' | sha1sum | cut -f1 -d' '. You need then to prefix this hash with {SHA} as explained http://supervisord.org/configuration.html#inet-http-server-section-values

Now that Supervisord allows remote connections, you can orchestrate several boxes at once very simply. Obviously more logic is needed to play nice with the sequence, but you get the point...

And supervisor is now available in devo.ps! Hurray